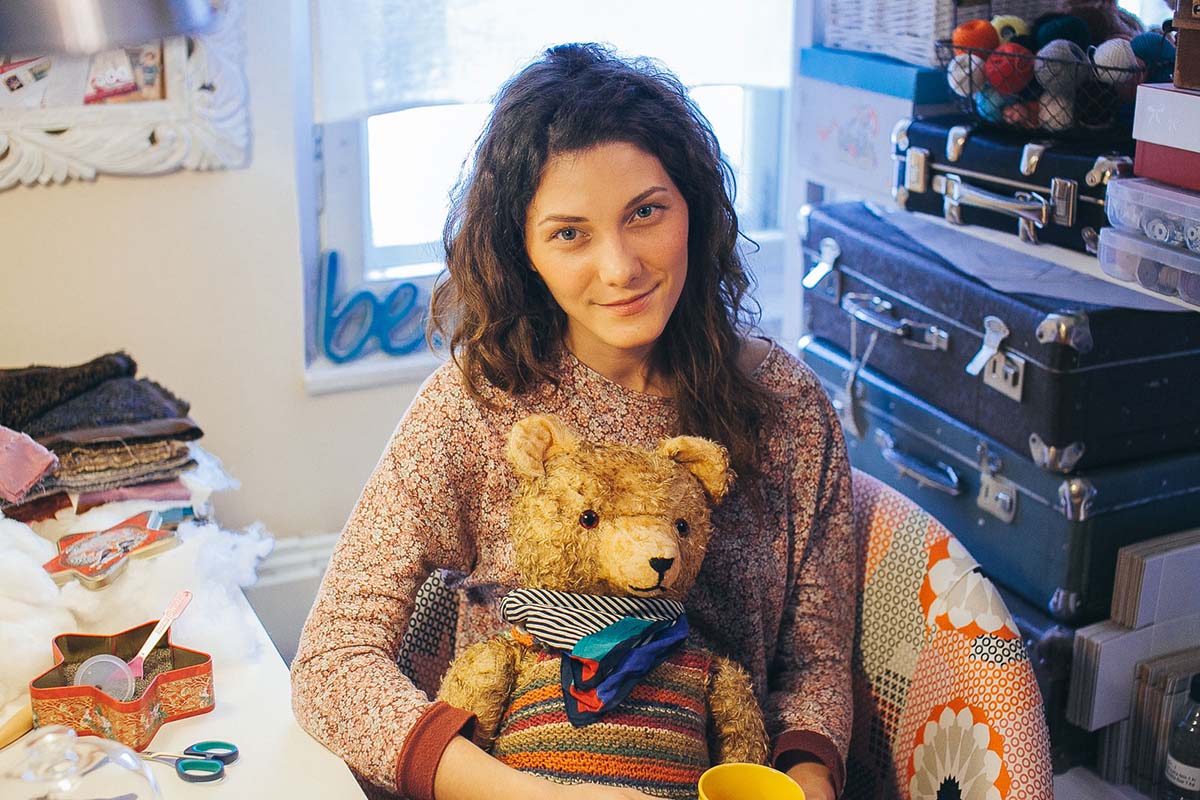 My name is Svetlana Stakheeva I am Teddy Bear Artist. I live and work in the city of Yekaterinburg, Russia.

So happens that in one degree or another creative surrounds me from an early age. The greatest influence to me as a child I got in the backstage of the Opera Theater in my city. My grandmother was an bookkeeper in this theater and I was allowed to knock about the theater alone as much as I want. Last time I did not leave the confidence that I was caught forever in this truly creative place. Even then I was very young, but I still store the pieces of memories of those days as one of the most valuable treasure in my memory.

Later, I had the unique chance to spend some time in the shops of Sysertsky Porcelain Factory. For that I am grateful to my second grandmother.

Since I was five years old I collected postcards with a kind and colorful illustrations. I only wish that I had been saving cards not as such, but the image. Days on the passage I cut pictures and glued them in special albums (sometime ago I found those albums It’s impossible to look at them without tears especially if you are deltiologist). But the craving for beauty, fine motor skills and precision lines now always with me!

As a child I loved to draw and to sculpt as a lot of children. I did it well and I really love the process so I spent a lot of time for these activities. But after just one year of studying in an art school I lost interest to paint and brush for a long time.

In the same year when I studied in the art school (it was my 5th grade) in my usual school began lessons of labor. In one of the quarters we sewed apron. Almost all classmates did it with help of their mothers and grandmothers. But I sewed myself … I got 4 with a big drawback with the words that I can not sew and are unlikely to learn. After that incident, I hid from my parents, that when they are not home, I utilize the grandmother’s fabric stocks which she once bought for future use. When my mother found out it I cut almost half of all fabrics. Since then began a strong relationship between me and my sewing machine.

I am very grateful to my parents that my craving for sewing was encouraging. Father reconstructed the sewing machine “Podolsk” that it becomes pedal and he was adjusting it for me. Mother was buying me “BURDA” magazines. The all our little flat became my sewing workshop… The needles was at the sofa all the time :-) My pocket money I spent for a cheap fabric, buttons and zippers. Since my 7th grade I dressed in clothes were maken by myself. Clothes were rough and strange but I liked it.

Then I was studying in the university at the faculty of mathematics and mechanics and was working in the shop of the extremal kinds of sports. Otherwise, nothing has changed: in my free time I continued creating of strange things. This went on till the middle of 2009 and then in my life suddenly came They.

It was the ending of May and I really wanted to something new. I was Googling something and after my again strange request I found the website of Elena Karmatskaya. After it I was lost for the World for three days. I am still admirer of Elena and she is my favorite artist. And of course there are her bears in my own collection.

I read about Teddy Bears, about exhibitions, about materials. I learned the history of creation of Teddy. I reviewed a bunch of photos and read all the books I found about technology. And just in that moment I wanted to create my own Teddy Bear. Urgently!

Urgent failed, but in 5th of August 2009 I done my own First Teddy Bear. And this date, I believe the day of creation "ABCbears".

During 2009 year I created 8 of a first strange bears and a one bunny. And they took all my free time so I left clothes making for a long time…

In the end of December of 2009 year I graduated from university and became free...

In the beginning of January of 2010 I visited my first Teddy Bear exhibition where I touched teddies of the real Authors with famous names.

I get a lot of impression after this exhibition. And I made my first elly in the middle of January 2010.

5th of March 2010 I quit my beloved work in the shop of extremal kinds of sport. There were many reasons for it… One of them was my new hobby.

In the summer of the same year I decided to try to engage in Teddy Bears’ world seriously... And I am eternally grateful to the universe that I got.